After Sontag: UK culture and a fourth sensibility 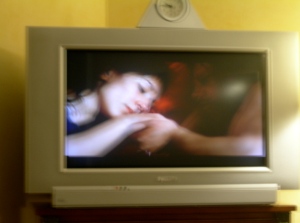 Living room TV – with a still from a film

Susan Sontag in her famous and original essay, ‘On Camp’ prefaced her discussion with some remarks about the central importance of sensibility or ‘taste’ in our lives. She wanted to highlight the fact that the aesthetic realm – the realm of style, decoration, design, the look of something, sensual preference etc. – has a certain primacy and can never be overlooked, ignored or underestimated. She wrote:

‘Most people think of sensibility or taste as the realm of purely subjective preferences, those mysterious attractions, mainly sensual, that have not been brought under the sovereignty of reason. They allow that considerations of taste play a part in their reactions to people and to works of art. But this attitude is naïve. And even worse: To patronize the faculty of taste is to patronize oneself. For taste governs every free – as opposed to rote – human response. Nothing is more decisive. There is taste in people, visual taste, taste in emotion – and there is taste in acts, taste in morality. Intelligence, as well, is really a kind of taste: taste in ideas.’

In other words, part of the very ground of humanity is to apprehend the world through aesthetic perception and judgement.

Having underlined the sheer importance of taste Sontag proceeded to identify the three prevailing artistic sensibilities in the western world:

The first reflects the canons of ‘high culture’: it is concerned with truth, beauty, and seriousness. Sontag recognises that ‘ordinarily we value a work of art because of the seriousness and dignity of what it achieves’ and she cites the paintings of Rembrandt, the poetry of Donne and the cathedral at Chartres, the Iliad and Beethoven’s quartets as examples.

There is a second major sensibility, however, which expresses another kind of seriousness: its trademark is anguish, cruelty, and derangement. Something is good because another kind of truth about the human situation, another experience of what it is to be human – in short, another valid sensibility – is being revealed. She asks us to think of Bosch, Sade, Rimbaud, Kafka and Artaud:  in fact, she asks us to think of most of the important works of art of the 20th century, that is, an art whose goal is not about creating harmonies but of overstraining the medium and introducing more and more violent, and unresolvable, subject-matter. A contemporary expression of this sensibility is found in the work of Anselm Kiefer.

The third among the great creative sensibilities is Camp: this is the sensibility of failed seriousness, of the theatricalization of experience. Camp refuses both the harmonies of traditional seriousness, and the risks of fully identifying with extreme states of feeling. Camp is the consistently aesthetic experience of the world. It incarnates a victory of “style” over “content,” “aesthetics” over “morality,” of irony over tragedy. Sontag invites us to think of Oscar Wilde. The whole point of Camp is ‘to dethrone the serious.’

But Sontag wrote her essay in 1964. Now, as I think about the UK, it seems that a fourth sensibility is upon us. In certain ways it overlaps with a mood reflected in 1990s’ Young British Art. That art represented an anti-aesthetic sensibility – a kind of inversion of good taste. But it was also about sexiness. And it is the explosion of this sexiness that characterises the new sensibility. But it’s not a subtle sexiness; nor is it concerned with the refinement of sexual desire or the sublimation of erotic impulses. The new sensibility is Raunch. What’s it like? Well, it’s everywhere: Raunch is the blatant, direct privileging of the loins; it’s serious enough and takes as its goal the sexual climax; it sexualises the world. It teases and titillates remorselessly – and expresses the total triumph of the orgasmo-sensual.  It’s an amazingly alluring sensibility made possible by the stable but sensual physical environments of shiny surface – of light and throb – that guarantee a space for the pulse of eros. It’s the apogee of a civilisation that understands how ‘sex sells’ and a civilisation that knows all about the relation between repression, taboo and desire.  It’s cynical and knowing: Raunch is animality mediated by digitised image. Raunch is the ethics of relativism fused with socio-biology. There’s a range of Raunch too; at the simple end there is porn; in the middle is the joy of ‘getting down and dirty’; (and still in the middle are all those wiggly girls.) At the sophisticated end there is Lacan. And Lacan tells us how desire can be doused but never extinguished …

From: Uncategorized
← Names: Classy and Connard
An apology →
No comments yet