A field in Farnham

A graceful field arcs and curves
Into the very heart of the town.
Mrs Tice said that once, in the days
of golden harvest and waggoners,
the field grew the finest hops in all England…

Now the field is heaven for:
Dogs – and nettles and painted-lady butterflies;
And footpaths that come and go –
Tracing the fugitive-histories of walking;
A refuge for gliders and hot-air balloons;
A stage for kite-flying, a joy of treasure hunts –
And the happy happy cries of children running, running free.

We love our field.

I once counted twenty-nine different things people did in the field –
Not including the kissing.
And the skies!
The beauty of skies overhead – waiting to be painted
– as Mr Falkner did.

The skies? Sometimes the skies are like a battle…

Below, the field lies quiet and still – in the executioner’s hour:
The blunt axe of development – poised: Ready to strike.
‘Save our field’ the banner reads:
tattered, proud, defiant. 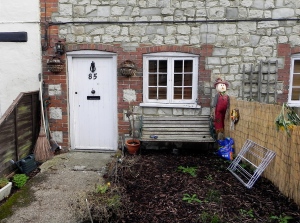 All in all it’s a cat-and-dog town, is my town:
Alleys for cats –
Dog-days and lamp-posts for dogs.
All in all it’s no place to be a mouse:
Cats at night, big owls too …
And hawks hanging high in the bright summer skies.

It’s good, is my town, for shouting jays and rat-a-tat-tat woodpeckers
A so-so place for earnest beetles staging a last stand
In the wooden beams of the Castle.
But just think: all those slugs having a ball –
Down at the allotments –
glistening – in damp-night lettuce-leaf heaven!

It’s good for cemeteries and Rural Rides,
And brave little ferns growing on red-brick walls,
And hops – and plastic ducks – racing for charity.
All in all it’s a drawing-room alley-cat town –
– a dog called ‘Skip’, a dog called ‘Cecily’ town.
But, whatever, it’s got a good heart, has my town.

Footnote: This was my entry for the ‘My town’ poem collection.

The essence of England – with thanks to Friedrich Nietzsche 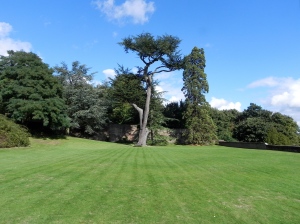 The beautiful garden in the grounds of Farnham Castle, Farnham, Surrey, England

This note begins in France and ends in England. Where in France? In Normandy at a motorway toll booth: I was waiting in the queue when a Belgian camper van driven by a complete incompetent – who spoke neither English nor French – reversed into my car and crushed its bonnet. In so doing the wretched man rendered my car useless. So, I was stuck in northern France near to Bayeux. Things looked bleak. (The situation was made worse because the camper van housed four large dogs that went berserk during the episode and would not stop barking. For now, I’ll try to forget about the accident, as well as the incompetent Belgian and his deranged dogs…)

It was late October; the Atlantic gales were beginning to storm in from the west; pitiless rain clouds burned the skies black and blacker still. Until the car was made driveable I was stranded. There was little to do but find a down-at-heel hotel, wait and read. And I happened to be in the middle of reading Friedrich Nietzsche’s ‘The Birth of Tragedy’. A few years earlier I’d been asked to help someone prepare a thesis on ‘art and truth’ and during my attempts to help I realised that I had an imperfect grasp of Nietzsche’s ideas on such things as ‘art and reality.’ Ever since then I’d felt a gap in my education – so, by reading Nietzsche (slowly and thoroughly) I was trying to put that right.

Everyone knows that Nietzsche admired the culture of the ancient Greeks and particularly the development and achievements of their culture prior to the arrival of Socrates. Half way through ‘The Birth of Tragedy’ Nietzsche turns to consider the phenomenon that is (or was) Socrates. Nietzsche thinks that Socrates has a lot to answer for: his obsessive trust in logic and reason, was the precursor of a ‘radically different culture’ to that which had been brought into being by the pre-Socratic Greeks. Nietzsche admits to finding Socrates unsettling; about Socrates there was ‘an air of irreverence and superiority’ and Nietzsche is moved to ask the following question of Socrates:

‘Who could have the audacity single-handedly to deny the essence of Greece – which we know as Homer, Pindar and Aeschylus, as Phidias, Pericles, Pythia and Dionysus, as the deepest abyss and the highest summits – as worthy of our astonished veneration?’

As I read these words two things struck me. First, Nietzsche identifies the ‘essence’ of classical Greece – the very essence that Socrates denied – in terms of its major cultural figures; and these figures – such as Homer and Aeschylus – I associate with the idea of high (or deep) culture. Second, if Nietzsche were to turn his attention to England and comment upon its ‘essence’ which particular figures in the cultural achievements of the nation would he name?

I suppose that the answer would depend on how Nietzsche would profile the high-points of English culture. But, would he tend to overlook the arts in favour of those people and those forces that drove the industrial revolution ? Would he, instead, consider Shakespeare the summit of an English culture of letters? After Shakespeare which authors would he think were worthy of mention? Would he consider the inventors and inventions of the English (such as the jet-engine) as part of the essence of English culture? Would he recognise the defiance of Thomas More? Might he place enormous emphasis on the development of the church after its break from Rome and the doctrines of Catholicism? Or would he identify the military leaders as embodying the real essence of the English? (It’s difficult not to be English without a sense that ‘we will never surrender.’) Or maybe Nietzsche would find some foundational myths of England that are embodied in some of its characters: but which myths? And which characters?

And, anyway, does the essence of England lie in the few people that get named in its history or is the essence something reflected in the gradual unfolding of a national character?

Following Nietzsche’s model, who would I choose? I think of someone who represents the best in humour, someone else who is all resilience, unyielding and stubborn – and someone who is the emblem of how to use language to say one thing and mean another. Actually, Shakespeare has portrayed them all. But I’d have to add Austen and Orwell. It would take a strange new version of Socrates to dismiss that which they reveal about the essence of the English.

but the list is incomplete … which comic or comedian should be named?