Anyone with the good fortune to see the two men would instantly take to them. They look so charming: both are dressed in traditional hiking gear and both are carrying knapsacks. Around their necks are knotted those brightly-coloured friendly scarves that walkers so often wear. The men remind me of benign travellers – of wanderers – of minstrels even. They remind me of Hermann Hesse’s characters – of Joseph Knecht, of Goldmund.

Actually the two men do not move an inch. They are, in fact, attractive little models; they are not more than 2 inches (5 centimetres) tall. What’s more they are figures in an art exhibit.

I don’t know where the artist who made the work found the models but they are truly beguiling: Is it their diminutive size that makes them so? Is it their seriousness of purpose? Is it their helplessness?

The two men are placed inside a large glass bottle. The bottle is half-filled with sand and the artist has (somehow) raked the sand into a smart striped pattern. The large glass bottle lies on its side. It’s a familiar enough arrangement. (We’re used to seeing ships in bottles.)

At one end of the bottle there is a stopper. The two men are heading towards the dead-end of the stopper. They do not seem to know that there is no way out. The work is called ‘The great future’.

It seems to me that the idea of a great and better future is one of the fundamental myths through which we live.

The gates of Eden 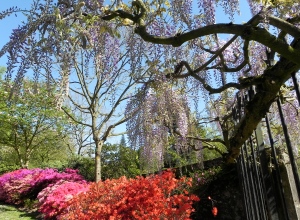 The gates of Eden

… that strange desire for the prison of Eden …

… into the labyrinth of dreams and nightmares …

(free to enter, no exit)