Paris: Cartoons and their power 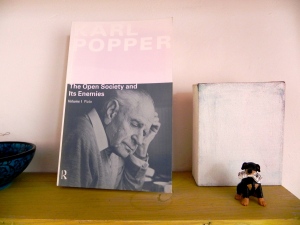 The open society and its enemies

Four days ago a BBC journalist considered the role of certain cartoons in the social and political culture of western democracies. He noted that part of the function of satirical cartoons ‘is to shine a light’ on intolerance. In such cartoons ‘authorities’ (big wigs) are sometimes associated with intolerance. So, the cartoons are intrinsically critical. At the same time they serve to remind us that authorities are always fallible simply because, as human beings, they are subject to the usual catalogue of human limitations.

The satirical cartoon highlights the shortcomings of individuals, of institutions, of the state, of ideologies and dogma. These cartoons unveil the pretensions of the powerful. In one way or another they have the potential to limit the abuse of power. In liberal democracies they undermine the pedestals upon which political and religious leaders stand. They remind us that the emperor may, after all, have no clothes.

Cartoons tell us not to take things too seriously. They are funny – and surely if there is a god then even he or she or it would see the joke.

Reference: ‘The open society and its enemies‘ by Karl Popper. (The cover of the book is shown in the photograph)

Footnote: Philosophers tell us that amongst the limitations that beset all of us (in virtue of our very humanity – our being human) are: sympathy, imagination, rationality. intelligence and, information.

From: Uncategorized
← … For the children of England
Just south of Paris … a micro-study in French culture →
No comments yet