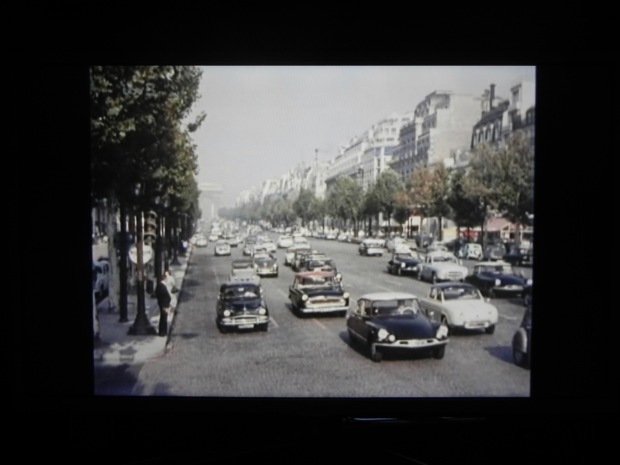 There’s a strange and sometimes dreadful English film called ‘The Rebel’. Released in 1961 it tells the story of a talentless artist who quits his mind-numbing job as a clerk in London before taking off to Paris to follow his ‘vocation.’ Vocation isn’t really the right word; the ‘artist’ in question suffers from egocentric and fanciful delusions about art and who translates these ideas into what he comes to call the ‘infantile’ style. Indeed, he never paints anything more than utter rubbish.

But that’s not the point:

The film provides an excruciating caricature of art and certain accompanying discourses on art. Oddly enough, awful as it is, it ranked as the sixth most popular film seen by the British people during 1961. However it remains very interesting for three reasons:

First, the film succeeds in capturing an idea of Paris – an idea as to how Paris was a distinct city not just because of its fabulous architecture but also because of its intellectual and artistic culture. Paris had style: there are one or two scenes in which, for example, the viewer gets sight of a Parisien boulevard stretching away from the Arc de Triomphe; gracing the wide avenue – with its characteristic pattern of cobble stones – is, of course, a Citroen DS. We get a hint of Montmartre too; And then again there are references to the existentialists …

Second, the film portrays the ‘look’ of the avant garde in Paris at the onset of the 1960s. In fact, in many ways, that ‘look’ seems entirely contemporary.  ‘The Rebel’ shows people that already look rather like hippies or glam-rock types or punks or the more interesting art students of today. One wears a silver/green lipstick; another has long purple hair … In fact, they look terrific. But how strange to realise that a look that seems so contemporary (so of the ‘now’) was actually portrayed over 50 years ago.

(Back then, we went to Paris because it was genuinely different from any other city. And we loved it because of that difference.)

Third, Tony Hancock, the lead actor in ‘The Rebel‘,  animated his role (as the artist) by choosing a maniacal tone of voice and a relentless obnoxious mode of communication. His unpleasantly egregious portrayal struck me as an immediate precursor of the televisual Daleks. I was left wondering whether the creators of Doctor Who had taken some sort of inspiration from the film.

From: Uncategorized
← Where I was from
Susana Silva: London (a first note) →
No comments yet