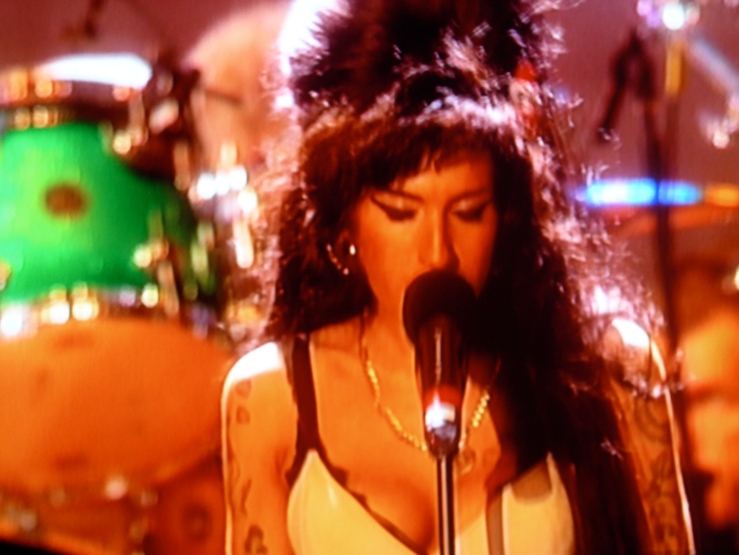 I’m often reminded of Amy Winehouse. I’m reminded of her when I see Boy George; it’s something to do with the hair. Years ago when Boy George made an appearance on television he was adorned with an extraordinarily elaborate hair-do; Amy Winehouse had a remarkable hair style too. I was fascinated by her ‘look’.

But I’m cast into the presence of Amy Winehouse whenever I’m working on a serious oil painting.

And this is because I always begin my painting to the accompaniment of music. In fact, before I pick up a brush and start mixing colours I make sure that my music system is powered up and on the go. Whatever playlist I choose it always begins with a song that gets me into the right frame of mind. It has to be a reasonably slow song – and something that has a slight air of meditation or solitude about it. Often I begin with Tim Hardin singing, ‘If I were a carpenter’ or Neil Young’s ‘After the gold rush’. Sometimes it’s Leonard Cohen’s ‘Alexandra leaving’ or Dave Gahan’s ‘All of this and nothing.’ But sooner or later on the playlist there’s Amy Winehouse and she’s singing, ‘Back to Black.’  I have a very strange sentiment when I hear Amy Winehouse singing ‘Back to Black’. It’s this: I cannot really believe that she is dead. And then I think of the enormous tragedy that befell her. But worse, I feel that Amy Winehouse should b=never have died. She should be here, now, enjoying her success and enjoying the good things in life. No: quite simply, Amy Winehouse should not have died.

This feeling, this set of thoughts, was crystallise the other day when watched and then studied the documentary entitled ‘Amy’. I already knew something about this carefully assembled study (made into a film) because I’d read some reviews when it was first broadcast and made public. But that was sometime ago. So, although I had one or two bits of information about the documentary they did not really come into consciousness as I sat down to watch the programme.

What a superb piece of work it turned out to be: ‘Amy’, the documentary tells as story that is essentially a complete tragedy. There were sufficient cues in amy’s songs that she was an insecure and vulnerable person but it was clear that the ‘systems’ into which she became entangled were toxic. Amy Winehouse originally had some great friends but they became secondary to her as she fell into a culture that was complicit in bringing her life to such a short end.

I liked Amy a great deal. She impressed me as an imaginative, clever, witty and headstrong young woman with an enormous talent, a striking talent, a fabulous jazz-blues singer who had the ability to stay close to the grain of human experience (her experience) and turn it into song; she had the power to bring delight and meaning to countless people.

But, in addition, the documentary ‘Amy’ successfully showed three things:   First, we had a glimpse of the images that characterise a great deal of youth culture – especially in those locales that have a claim to be avant garde or edgy or ‘where it’s at’. Where? Well, places like Camden or Hackney or wherever rock and pop festivals of music take place. We had a profile of a version of contemporary English culture that pleases the young.

Second, Amy Winehouse found herself in harmful social systems from which it was very difficult to escape. At one point in the documentary I said aloud: ‘They killed her.’ Organisations should be places fit to house the human spirit – but most of the social systems in which Amy Winehouse found herself were deeply problematic and fundamentally dysfunctional.

Third, ‘Amy’ raised questions about the fragility of the human soul. It’s a bit too easy to say that Amy Winehouse was ‘a vulnerable person’ but humanistic psychologists are alert to the psychological damage that attends unmet needs in childhood and the enormous problems caused by subsequent degenerate interventions and collusive relationships; it was dead clear that Amy Winehouse had a psychology that was troubled and insecure. I think she needed that kind of reassurance in which people would have allowed her to feel fundamentally OK – and who would help her to determine a life trajectory that built on her evident strengths. Her old school friends (good people) tried to offer this but she was, in a sense, ‘out of reach’.

The documentary ‘Amy’ also achieved something more ominous. It presented, through image and text, a world of sex and drugs, of stars and bars, of ‘fame’ that looks romantic and exciting and hugely attractive. It’s a dangerous image;  it’s this kind of image that can turn out to wreak havoc on persons, can turn out to be lethal.

Of course Amy Winehouse should not have died. She should still be with us – singing out those amazing songs about life and pain and struggle and hope:

‘We only said goodbye with words
I died a hundred times
You go back to her
And I go back to… black.’

Footnote: The photograph shows Amy Winehouse singing at a concert in London a few years ago.