French sociologists keep getting it right: in France, in England too, we are still in the middle of Debord’s ‘society of the spectacle’ – a kind of wall-to-wall presentation of life-as-entertainment. But more recently we’ve even gone beyond this: for example, the city of Nantes in western France appears to express Baudrillard’s concept of a western world given over to hyper-reality and the hyper-real world.

At the centre of Nantes lies an island (the ‘isle de Nantes’) that has, with the help of EU money, transformed itself from a place of factories and warehouses to a beautiful yet ghastly and horrible manifestation of an absolute artificiality – a hyper-reallty. The buildings are mainly (almost) high-rise blocks all designedly different – all clad in architectural whims – in mixes of concrete and wood and relics and super new materials – faux authenticities of the now and the then and the next.

It’s peculiarly disturbing; there’s something dreadful and inauthentic about the developments that have taken place on the isle de Nantes.

It’s as if we are invited to enter a giant amusement park devoted to distraction and the curious amalgam that is part pleasure of the senses, part disembodied moments of the mind. You aren’t supposed to think anymore. Nantes – the isle de Nantes – is a stage upon which a manifestation of who we are now is portrayed: cool, connected, different, the same, hash/tagged … (The old atavisms of humanity are kept at bay; with luck they won’t inflict their nightmares on us all).

And there’s even a special art gallery in an old banana storage depot that shows the wonderful work of hyper-modern art – along with seriously ludicrous inscriptions explaining the work on view. It’s by an artist called Ange L. He has the perfect name: ‘Ange‘.

He makes me think of the the angel of history … 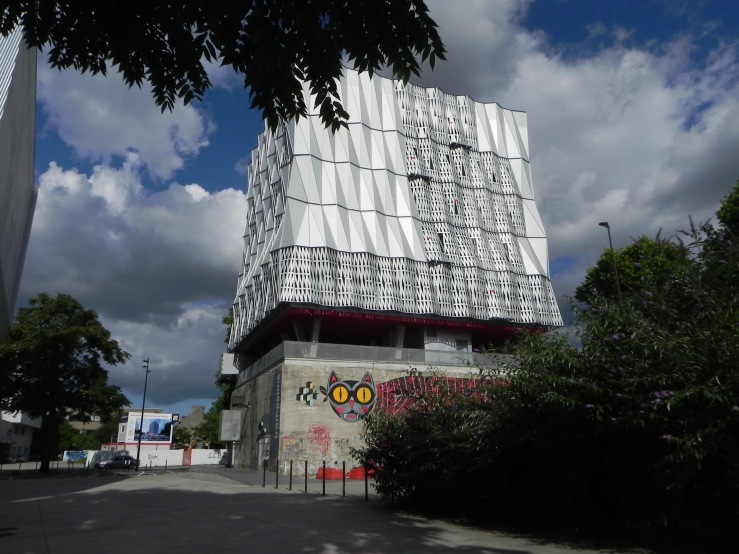