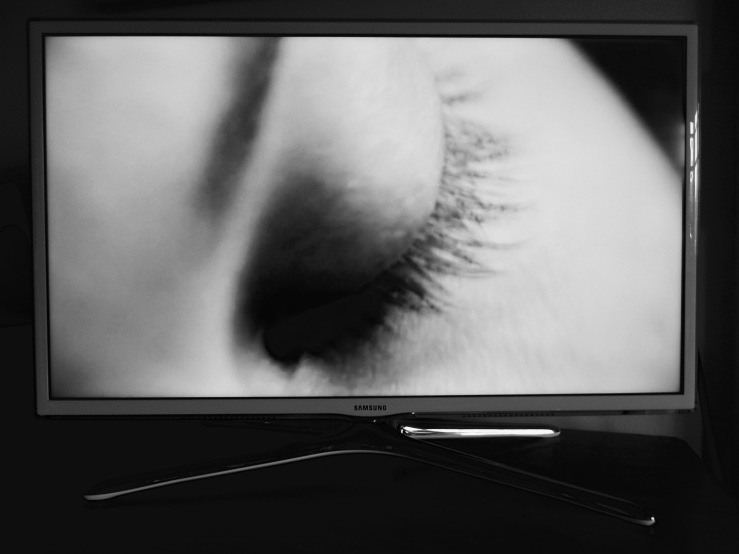 Hsiao-Yang Lee looks out at the world, looks at us, looks at me, with a charming, beguiling and hypnotic gaze. She explores our image-laden world with grace and elegance. She investigates the presentation of self in the milieu of social-media and cyber-space.  The eloquent art critic Charles Darwent once noted that all art is a process of finding out and Hsiao-Yang Lee stands as a perfect exemplar of the artist-as-inquirer.

Her most recent exciting and provocative work ‘The Veil’ has just been exhibited at the University for the Creative Arts in Farnham, Surrey, England. The photograph (below) shows young women as both subject and object; it gives a first idea of her wonderfully stimulating project.

Her exhibition is dominated by two inter-related presentations. The first is a fascinating short black-and-white film of the artist herself. As the film begins she looks directly at the camera – at us – at me; she holds our gaze – and only for the briefest of moments does she suggest an emotion, a state of mind. Her face is beautiful; the still, almost perfect symmetry of her face, suggests a Platonic form or a mask drawn from the traditions of antiquity.

I was captivated, intrigued and disturbed by the film. It showed the head and shoulders of a young and beautiful woman, a woman simultaneously gazing and being the object of the gaze – a presence both veiled and momentarily revealing. But she remained an enigma: and that is the brilliance of the work: Who is she? And more: Is she both judge and judged, evaluated and evaluator? I wanted to get to know her despite the significant gap in our ages. I saw her as an emblem of the new international culture deluged by the computer-mediated image.

The other complementary aspect of her work, ‘The Veil’, featured a very large number of same-sized black-and-white photographs. The photographs occupied just about every inch of space in the area devoted to ‘The Veil’. Photographs of whom? Well, after seeing her film my first impression was that all the photographs were of Hsiao-Yang Lee herself. I thought that somehow she had managed to present herself in a very considerable number of ways. But then I changed my mind; the portraits on display really did seem to show similar yet different people. These were  young women – perhaps from Taiwan or Japan or Mainland China – a majority of whom had ensured that they were beautifully presented. They clearly met the canons of conventional beauty. They impressed as models, as pretty and elegant; many looked like starlets or the kind of young women who present this or that on the television; these ladies could sell things – they could advertise – they could easily be associated with all the trappings of the good consumerist life. They might even sell themselves. And, in various ways, I could not ignore the subtle or overt sexualisation of many of the represented young ‘women’; their sexual presence was a kind of ‘given’.

However, there really was a twist in this tale. In fact I learned that, after all, the photographs were of the artist herself. They were both of ‘her’ and ‘not her’. She had succeeded in making them up, of making various versions of her self. This raises some very difficult questions about identity. The photographs illustrate possible selves – and in so doing underline the fluid nature of identity. Whilst there may be a conventional cultural idea that we have a ‘self’ (perhaps a ‘real self’) Hsiao-Yang Lee inclines anyone who contemplates her work towards a process conception of the self, a self not fixed but unfolding and becoming…

At the same time the photographs demonstrate the choices we can make about how we present ourselves in a two dimensional photographic image. (Who am I to be? What effect do I wish to create? What is my real agenda? Should that agenda be hidden?) Added to this is the remarkable capacity we have for altering the image of ourselves that we present in cyber-space. A new power of veiling has emerged in the last few years (and it approximates a kind of ‘digital plastic surgery’).

My description does little justice to the dominating ‘here-ness’ of this unknown person, (these unknown persons). ‘Look at me’ she/they said – but the photographs came with a warning: ‘Look at me – although I’m competing with all the others. But please look at me … I’m beautiful, I’m attractive, I’m interesting … aren’t I?’ They were still almost girls …

I imagine that most of our engagements with art take place in two different modalities: The first is the experience of the work – its initial impact, the sensations and emotions that it excites. The second is the incipient reflective and then the more prolonged intellectual response.

So how did I begin to deepen my appreciation of the intellectual value of Hsiao-Yang Lee’s project?

I did not initially know that the title of her work was ‘The Veil’ although her reference to the notion of something hidden behind the surface resonated with my experience of watching the short film of herself. What lay behind that screen presence? And as I watched the film my own personhood became salient in my consciousness: How? Well, I was on the edge of being a voyeur. It’s discomfiting to feel like a voyeur but the very act of feeling discomfited reveals a moral dimension of ‘The Veil’: we should (at least in liberal democracies) respect the privacy of others. And perhaps we can go beyond this and remind ourselves that empathy remains one of the key elements that goes someway towards civilising the beast out of ‘man’.

But Hsiao-Yang Lee is implicitly concerned to show us the world of surplus and commodification. Her young ‘women’ are so numerous and so aestheticised that they are rendered doll-like; as playthings, as entities up for auction or on sale, as products – almost disposable. Their humanity gets lost in their production.

The work also shows the puzzle of desire; these young women are lovely creatures and seem to promise something ineffable – the pleasure of the look , the pleasures of the flesh. Their look transcends their viscerality. They underline the fact that our culture privileges a certain kind of carefully-manicured feminine ‘look’.

And perhaps the most confronting aspect of the work is the ongoing objectification of women in this age that is (after Sontag) super-saturated with the image. It must be delightful and terrible to be looked at, stared at, undressed and enjoyed – to be an object, all surface, the apotheosis of unreality.

This brilliant work shows the challenge and the double-bind of being a young woman in social media/selfie/photoshop culture. It also advocates, through the stillness of the lovely film, a slowing down, a taking of one’s time, in order to connect with another; a connection made without the ubiquitous distractions of digital technology. Her art can be read as critical; in its way, it echoes the observations made by the late David Mercer who (in 1966) thought that the societies that we are creating (highly-technological developed societies in both the west and the east) are ‘inimical to human fulfilment, to human dignity’ and ‘to human grace’. We are, in effect, distorting people both literally and metaphorically.

Oddly enough, I felt rather reluctant to talk to the artist because I imagine that, to her, I must resemble a relic of antiquity.

Hsiao-Yang Lee (Sunny Lee) is from Taiwan and has enjoyed the culture of Fine Art in England. If you have the chance do try to catch a glimpse of her beautifully conceived work. She’s a charming and wonderful example of the artist-as-inquirer.

Postscript 1; And now back to the film …

The film has a special dual quality which in part reflects the idea that art is always in some sort of dynamic relation with the viewer and, in many ways, it is the viewer who produces or constructs the work. Potentially any work of art can excite and reveal the viewer’s subjectivity. Hsiao-Yang Lee’s film had the uncanny power to switch the psychological focus from the object to the subject. Initially she was the ‘object’; after a while she became a ‘subject’. But the steadiness of her gaze began to make the viewer (me) feel under scrutiny. I, too, had become an object and found myself under some sort of examination. The examination raised questions about my own psychological characteristics and cast of mind – and touched upon the interface between the conscious and the unconscious. ‘The Veil’ has this exceptional catalytic quality.

Postscript 2; A note from the artist:

In response to my first reaction to ‘The Veil‘ Hsiao-Yang Lee told me that, as she constructed the photographs, ‘the make up, the clothing, even the expression or emotion on their (my) face’ she became ‘another person, a different me, a new character.’  She noted that she wonders why ‘these women enjoy adopting and showing a kind of seductive pose.’ She goes on to say that she really likes a quote by Carmen Hermosillo:

“Cyberspace is a black hole, it absorbs energy and personality then re-presents it as an emotional spectacle. It is done by business that commodifies human interaction and emotion. And we are getting lost in the spectacle.”

“Perhaps, our humanity gets lost in this cyberspace, especially for my generation.”

In the end, she writes,  ‘the whole point of ‘The Veil” can be summarised as follows:

And here is a still from that entrancing film: