It’s November in Paris. The first chill winds have turned the air sharp and crystal-clear. I’m staying in the 10th Arrondissement – and very close to the Canal St. Martin. In fact, when I was learning to paint and learning about the history of art I studied a number of artists amongst whom was Alfred Sisley; his works include one or two of the canal itself; and, I can just about discern the building in which I stay in the hazy background of one of them. Nowadays the canal is one of those zones in Paris that is full of hip and semi-bohemian mainly well-heeled youngsters. The old factories and tanneries are long gone. The big fat black cargo barges too. The original Hotel du Nord is still there – and it helps to confer the idea of ‘authenticity’ on its immediate surroundings.

If you were to walk down from the Canal St. Martin to Republique and then on to the beautiful architecture of the Marais you will see many many cafes and restaurants packed with the young, dressed in their up-to-date fashion and glazed with the sheer loveliness of their excited and hopeful faces. There’s all to play for! It’s a great sight and is all about the expression of a post-industrial deeply-mediated culture awash with images and surplus and online ‘communities.’ Ethnically it’s mainly white. And perhaps the most intense expression of this seemingly happy and consumerist culture is found in the Rue Montorgeuil nearby in the 2nd – the 2eme – arrondissement: in November’s early evenings this street is simply a’buzz with the shine of the happy hours – drenched in romance, allure and seduction. To experience it is to be immersed in the western world that has, more or less successfully, been brought into being.

But it’s not all good news; and not so by any means. In fact, if I look down from the windows of the traditional high-ceilinged flat in which I write and paint I can see what looks like a thriving culture of drug-dealing: cars arrive and leave their warning lights flashing; exchanges take place – exchanges that involve a secretive hair salon that functions as a locale and information centre for drugs – and once the deals are done the cars speed off. Sometimes, right under my nose, I can see men preparing various cocktails of drugs in the cars – mainly cigarettes spiked with whatever the dealers are providing.

The woman – she’s a grandmother – who lives above me is increasingly displeased with the unsettling character of the neighbourhood. She’s a tough nut and has even chucked a bucket of water out of the window of her flat and over the ne’er-do-wells – just to show her displeasure. She tells me that the police are not really in a position to do anything because the dealers will simply evade justice and move elsewhere. There are a number of tramps and beggars too – along with some people who are plainly mentally way off the scale: in front of me I see the disposed and the deranged. Sometimes I get the feeling that I’m on the edge of skid row (as the Americans have defined it.)

You have to be rich to escape the realities of our metropolitan world.

It would be easy to become very cynical about the world that is Paris – and, more generally, the world of western towns and cities. The privileged young are plugged-in to pleasure; the marginal are failing by the wayside; the less privileged classes are on the make. Buy in or lose out.

But the city is well-organised and its systems just about hang together; The people who keep the city going – the ‘key workers’ – put up with all the inconveniences, frustrations and difficulties. They put up with rudeness; they put up with relatively low pay. They are remarkable and long-suffering. Amongst them there is a man who has a pretty dismal job. I see him passing by my flat on most days; he’s employed by the city of Paris to do some street-cleaning. His ethnicity is manifestly different from the youngsters in the cafes of the Marais or Rue Montorgeuil. It’s an important job because rubbish bags are left on the street; they get opened and their contents are strewn over the pavements; Why? Well, the very poor search the bags of rubbish for whatever they deem has any value. So the pavements get to be a mess. (Often a vile mess.) Anyway, I was intrigued the other day because the street cleaner did not seem to be focussed on cleaning the streets: he had a long pick-up tool and he was poking this pick-up tool through some railings. Next to him was a woman from an Asian country. She was pointing through the railings. She looked very worried. The street cleaner spent quite a long time as if fishing for something with his pole. And then it became clear what he was fishing for! The Asian woman’s cap had blown off in the swirling winds and disappeared deep down behind the railings. The street cleaner had managed to retrieve it for her. Gaily she put on her silver cap, murmured a few words to the man and went on her way. The man duly returned to his never-ending job of doing his best to keep the streets clean.

I thought about this micro-episode of life and work in Paris. My sense is that the modest virtue of consideration – consideration for others – is diminishing. It’s a fragile virtue but it’s really a great virtue. Nietzsche might disagree and consider such a virtue a part of a ‘slave’ ethics; his critique of our various moral schemes is truly beguiling and his acute perception of humanity’s limitations is something I can neither ignore nor dismiss. However, I do not think that consideration for others necessarily enslaves; instead it reflects our wonderful powers of imagination. And here, in the 10eme arrondissement of Paris, a street cleaner made every effort to help someone retrieve a prized possession. He showed real consideration as well as patience. I think he went beyond the call of duty – and I admire that. 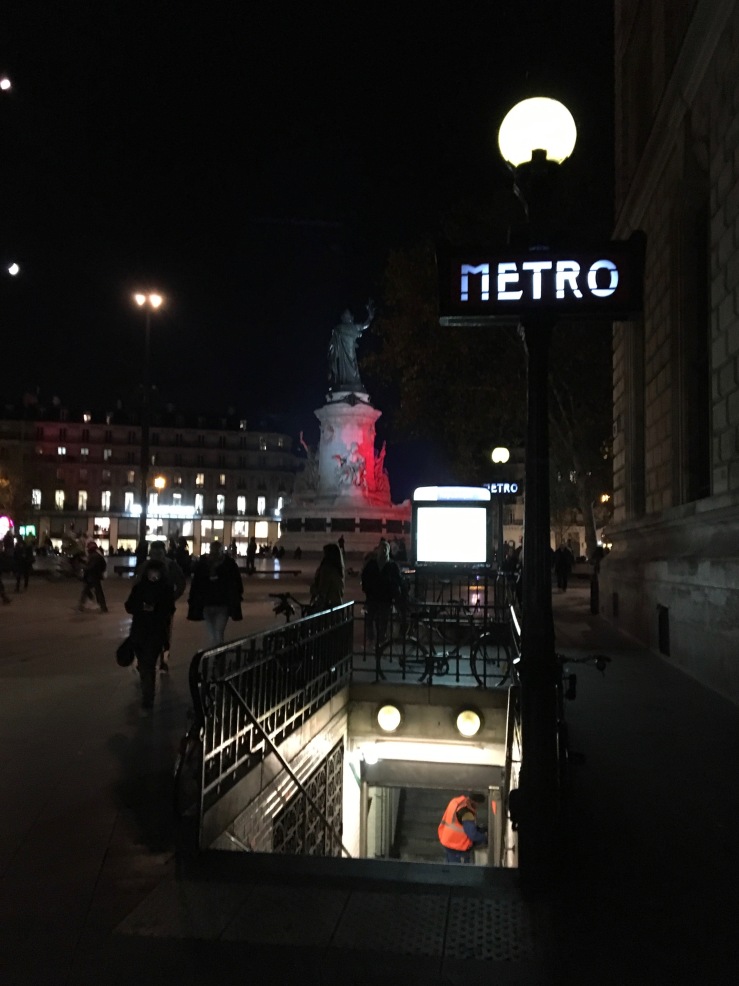