Tracy Chapman – at Roseland, New York … and so it goes on. 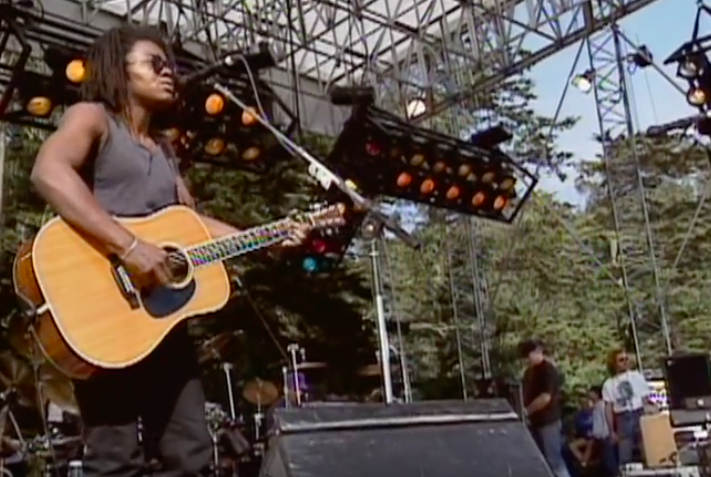 I was in New York City at the dawn of our new millennium. One of the people staying with me on West 54th street said that Tracy Chapman would be ‘just down the road’ giving a concert in Roseland. So we went. He secured some last-minute tickets and we arrived just in time for her ‘set’ to begin. It was a great night – strangely hypnotic – and the lighting was mesmerising. Tracy Chapman performed most of the songs on her new album ‘Telling stories’.

She did not play her early song ‘Subcity’ which was not surprising but nonetheless I would have liked to hear it. I would have liked to hear it because a few blocks north of me a kind of cardboard city existed. It was just up the road from the site of the John Jay College of the City University, New York. (That’s where I was teaching.) Cardboard city was a version of Tracy Chapman’s Subcity. This was a place where people barely survived – barely existed. This was ground zero minus 1. This was the underclass.

Whilst I was in New York I thought a great deal about the various lives played out by the people of the great city. I thought about the bejewelled beauties going in and out of Trump tower and I thought of the contrasts – and of my students who were coming to the College from the distant parts of Queens and Brooklyn, the Bronx and even further – from Philadelphia and so on. Things were not easy for them. Life, as Tracy Chapman said was ‘hard’. It was hard for many of my students and some of them thought that the dream was over; in its place, there’s was to be a never-ending struggle.

I was reminded again – now almost two decades later – of Tracy and her ‘Subcity’ when I was shopping in my home town: Outside a supermarket was a man – a destitute man – arranged on cardboard – and accompanied by his dear sweet dog. He looked in a really bad way. And all round him in the car park were the most superb cars you could ever imagine. It’s strange that this is the way things are. This man is part of our own subcity; And, here in the UK, subcity morphs into, overlaps with, the shabby desolate unkempt places (‘communities’) up and down the whole of the land.

As I walked home from the supermarket I recalled my days in New York and the early songs of Tracy Chapman. And I sang a few lines from the song that, once again, played its tune to me: I sang:

‘Won’t you please, please give the prime minister my honest regards for disregarding me …’

Here are some verses from Tracy’s original lyrics: It’s a good song and perhaps we should give it a higher profile than we currently do.

Here in subcity life is hard
We can’t receive any government relief
Won’t you please, please give the President my honest regards
For disregarding me

Here in subcity life is hard
We can’t receive any government relief
Won’t you please, please give the President my honest regards
For disregarding me

I’d like to please give the President my honest regards
Oh, for disregarding me

PS: The photos above and below are taken from an early open-air concert in which Tracy Chapman performed. It is not Roseland.

Jenny Lewis and my iPhone

This is a post about a charming singer and my iPhone:

Quite how I came to have a record by Jenny Lewis I do not know. But there it is.

In a recent article I was told that plainly Jenny Lewis is ‘witty and engaging and curious – about the world, about relationships and how phones affect us all.’

And this is what she went on to say about iPhones – which is where I come into the picture:

‘Looking at a phone is like reading someone’s mind,’ she says. ‘So their mind is just sitting out on the table when they’re not in the room … So tempting.’

But has she ever succumbed to that temptation? ‘Oh yes,’ she says. ‘It’s such an invasion of privacy, but also, sometimes, a necessity.’

However, her looking at the content of another person’s phone hasn’t always ended well; she admits this in her song ‘Taffy’, a ballad from her latest album, ‘On the Line.’ With reference to secretly looking into her partner’s phone the song includes the words:

‘As I looked through your phone – I am such a coward – How could you send her flowers?’

And so, her curiosity about her partner’s phone led her to discover his infidelity: there it was, spelled out in digital clarity. The discovery was as she says: ‘very painful,’ but she adds:

‘I didn’t look [at his phone] because [I thought that] there was nothing in there. I knew something was in there and I found it.’

The strange thing is that I have an iPhone upon which there is virtually nothing. I have the phone a) just in case I have a stroke or a heart attack b) for when I need travel directions (although I have yet to go anywhere) and c) kept close to me when I’m painting – and my wife is out-and-about in her car; it’s there in case she breaks down or some crisis emerges. Most of the time my phone is switched off. So if Jenny Lewis found my phone what ‘sense’ would she make of my mind? I wish I could let her have it and discover how she would use it as evidence concerning the nature of my psyche – or use it in order to begin a conversation with her. That would be terrific.

Incidentally, Jenny Lewis is very attractive. The cover of her latest album bears testament to that fact. What’s more her song ‘Red Bull and Hennessy‘ is wonderful. I’m playing it as I paint a portrait of Kurt Cobain.

What a drag it is getting old …

Years ago one of my daughters had the dubious fortune to be spotted by a ‘talent’ scout who invited her to be included on the books of a rather well-known modelling agency. She duly went along, had photos taken and appeared on the agency’s catalogue of seemingly beautiful young things. Various calls for photo-shoots and castings followed but in no time at all my daughter reported that, ‘It’s not really something I want to be involved with – I can’t stand the scene.’

So she abandoned the idea and went off to study art and aesthetics.

It was the media ‘scene’ – the world of, for want of a better word, the ‘presentation’ that reared its awful head in an eagerly anticipated BBC television programme last night. The programme was ‘This Time’ – with Alan Partridge’ and I had looked forward to seeing it – mainly because there is something weirdly attractive about a certain genre of tragicomedy: All those programmes that caricature and parody the affectations of ‘being’ and comportment in the media-world and the world of the culture industries are often quite funny and at the same time revealing. They are funny because the occupational realities which they portray are often ludicrous; and, the gap between the real and the fake (or false) is nicely revealed. We often feel sympathy for the characters because we see that they are caught in this new world of short attention spans, wall-to-wall superficiality, and contrived story-telling. They all know that the whole enterprise is really a great big sham.

The programme ‘This Time’ had a go at amusing us with its manifestation of this aspect of the media-world.

But after watching 21 minutes of the BBC’s ‘This Time’ I switched the television off. If it was funny it was only funny because the rendition of the TV presenter was, in parts, a good portrayal of all those smiling twerps that front so many modern television programmes. As I watched the programme it was as if I could hear any number of well-known TV presenters rolled into one. It was almost embarrassing to have to endure their prepared scripts and their cliched statements and their having a ‘passion’ for this, that or the other. And the programme, ‘This Time’ was good to the extent that it revealed the ego-centrism of our current crop of presenters. (What a dismal corruption of the soul must have taken place!)

But that is just about all it managed to do. It went on – and on – underlining that same egoism, self-aggrandisement and self-absorption. To that extent it become tiresome. It failed because it showed a one-dimensional character – and, after a while, one-dimensionality is predictable and boring. Coupled with this I simply did not like the central character of ‘This Time’: He was unbearable. That’s why I switched the television off.

Oddly enough, I wondered if that was the ultimate goal of the programme: I wondered if the deeper message was (is) simply that there is such an excess of television coupled with the profound distortion of reality that is effected by the media that we should stop watching TV altogether.

Footnote: The line, ‘What a drag it is getting old‘ is taken from the Rolling Stones song ‘Mother’s little helper.’