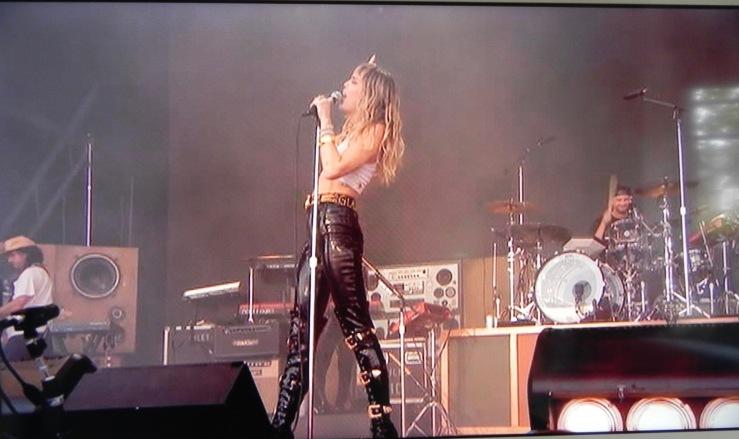 Rock journalism is a specialist and rather esoteric art. I used to study with a young man who was hell-bent on becoming a rock journalist; he was the kind of person who would spend hours on the telephone or internet trying to get tickets for the Glastonbury festival. He reckoned that no one could be an authentic rock journalist unless they had direct experience of Glastonbury and many other other rock festivals. He had a point. (In fact, when he did actually get to Glastonbury he drank such a huge amount of beer that he became oblivious to much of what was going on.)  I’ve been struck by the fact that the rock music scene must be one of the few places where ‘looks’ don’t matter too much. It means that talent actually counts for something.

Anyway, one of the cultural success stories of the UK is the quality of its rock music and the buzz of its festival scene. Of course, a few days ago we had the high excess – the super-abundance – of Glastonbury to enjoy. I noticed how the rock journalists reviewed the various acts: how Stormzy ‘tore up’ the stage, how Kylie ‘beguiled and charmed’ her massive audience, how the strangely melancholic and ghostly plangent chords of headliners The Cure re-created moments of rock poetry. But for me the outstanding, the stunningly mesmerising performance was given by Miley Cyrus. She looked super-sensational; she sounded super-sensational; she was super-sensational; her’s was one of the most sustained and powerful rock performances imaginable. I was delighted for her. She was breathtaking. Miley even managed to include her monumental ‘Nothing breaks like a heart‘ along with a mesmerising tribute – a kind of homage – to Amy Winehouse with a stunning version of ‘Back to Black‘.

I think Miley Cyrus showed us how rock stars become super stars. As she performed it was, quite frankly, simply impossible to take one’s eyes off her. And I discovered that I was not alone: A journalist from the ‘Spectator’ told us that, as her performance unfolded, he ‘stayed to worship’ her; and then he added: ‘Of the 500 or so performances I’ve seen at Glastonbury over the years, this was up with the very best. She did ‘Jolene’ as twangily as her godmother Dolly Parton, Zeppelin’s ‘Black Dog’ with a banshee wail as mighty as Robert Plant’s, ‘Back to Black’ as debauchedly as Amy Winehouse, ‘Nothing Else Matters’ as heavily as Metallica … Then her dad Billy Ray Cyrus came on with rapper Lil Nas X to perform the recent viral number one hit ‘Old Town Road’. I do feel sorry for all those of you who missed it.’

And here is another review from the Guardian newspaper: It begins:  ‘The narrative around Miley Cyrus has always been about how she picks up one sound – hip-hop, pure pop, gnarly authenticity – and then “rejects” it as she moves on to the next thing. Her current styling is “hard rock karaoke at a gritty midwest bar” …’

Well, that’s a bit mean-spirited! I would have said that her current style is ultra-fashion blitzkrieg rock. Better still, it’s simply star-spangled rock. But the Guardian review went on to capture a little bit more of the phenomenon that is Miley Cyrus as follows:

‘… Miley … stomps around the Pyramid stage in wet-look leather and a tiny skin-tight vest, yet spouts new-age wisdom … and cries as she sings ‘The Most’, a song about her mum.
The glorious thing about Miley is that she doesn’t really make any sense, and her chaotic energy is the thing that binds it all together and keeps everyone goggling even when she makes moves that would traditionally result in shedding followers – She covers Amy Winehouse and Dolly Parton, brings out her dad Billy Ray and rapper Lil Nas X for the latter’s ‘Old Town Road’, and wears a lilac wig to play ‘On a Roll’, the “hit” from the episode of Black Mirror where she plays ill-fated pop star Ashley O. Played half in its original synth-pop style, half as the Nine Inch Nails song it riffs on, it becomes a hard-rock battering ram yowled so mightily that she makes Steven Tyler sound like Aled Jones. As insane as it is brilliant.’

Well, yes! She really was astonishingly brilliant and for years to come, when the history of Glastonbury and rock is written and re-written, there will always be the recognition of Miley Cyrus at Glastonbury 2019. What’s more, in a striking concluding gesture, she suggested a willingness to sacrifice herself for art. 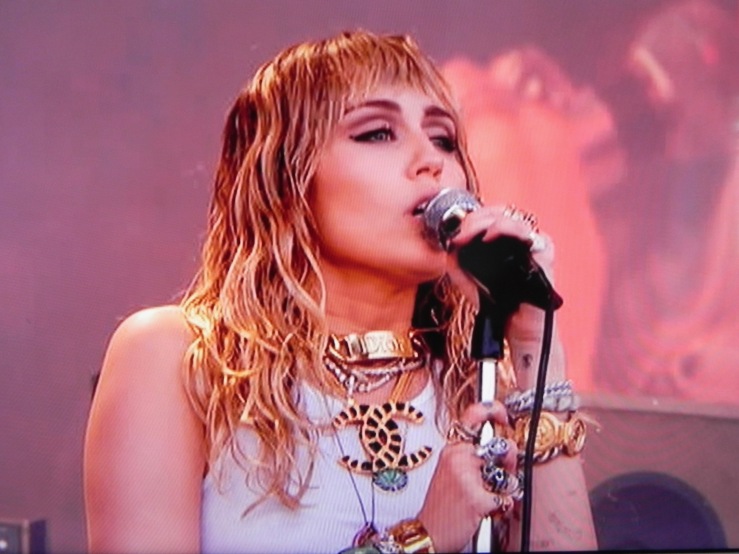