Open Cut – Twilight of the idols 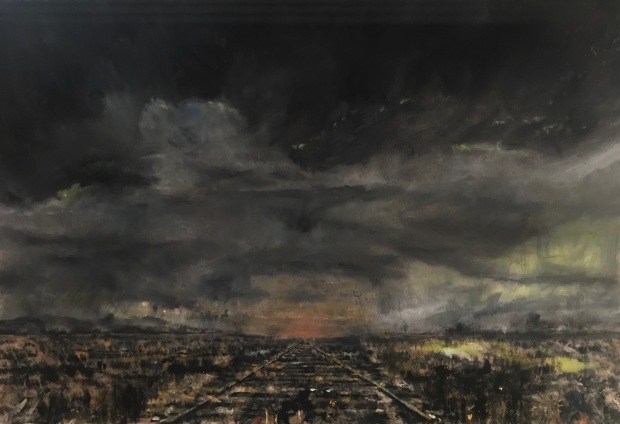 Open Cut. The brief was appealing: those of us on the MA Fine Art course were asked to imagine that our person (our body and/or mind) was a surface and a type of mining operation was to take place: We had to consider that this surface would be subject to a rather gentle open-cast type of mining. In the real world this kind of ‘open-cut’ mining unearths things of value that are hidden from view – but not far from the surface. Here though, in a rather poetic and charming piece of text, we were invited to search for whatever it was about us that lay somewhere beneath the surface. The task reminded me of a lovely chapter in Sheila Ernst and Lucy Goodison’s feminist book, ‘In our own hands’: their chapter focused on the ‘buried treasure’ that is ‘there’ within us – in every person – and which is waiting to be accessed and transmuted into a more integrated and flourishing way of being. (In so doing these writers touched on the allure of transpersonal psychology.)

In my case I thought rather less about any rubies or sapphires, of gold and jade, of ’buried treasure’ that might lie concealed within myself. Instead, I focused on something that has been troubling me for many years: if I dig a little below the surface I come face to face with my own psycho-disturbance – or ‘derangement.’ I come up against a kind of dark destructive energy – a kind of psycho-pathology. I am not mad in the obvious sense of being delusional but I certainly am susceptible to a kind of hallucinogenic de-stabilising play of the mind. My moods are volatile. Social interaction, for me, is something that is anxiety-laden. That is why I like some art, plenty of literature and certain kinds of songs. Underneath all this, I am aware of being a damaged person. And, in this regard, one of my long-standing professional work colleagues once flatly described me as ‘damaged goods.’ It’s an unsettling definition but in many respects it is accurate.

So, I began the project by thinking in these rather general terms. We had a week or so before we were due to show a work of art (even if it was incomplete) and this work was to reflect our personal search for that which lay ‘just below the surface’. However, whilst still at this early stage I was very engaged with thinking about my mother and what had happened to her – which inevitably had had a huge impact on me and which contributed to my damaged personality. She was made a refugee in 1939 when Hitler invaded the Sudetenland; when she arrived in the UK she basically had an awful time. Nonetheless during the war she became an officer in the WRNS and in its immediate aftermath found herself as a translator and interpreter in Germany.  A few years later when I was aged 4 and we were living in Singapore she had a catastrophic mental breakdown. It was my life-long response to this that, in truth, lies just below the surface.

I came to realise that she was traumatised by the savage disruption caused by the Second World War. She openly admired many aspects of German culture and I learned that she had close associations with the city of Dresden. By chance, when I visited Dresden in 2009 I came across a small archaeological dig that was uncovering and examining some smoke-blackened cellars in the heart of that city. As I looked at the wretched ruins I thought of my mother and the unspeakable cruelty that had befallen that once beautiful Dresden. I may even have been looking at the ashes of my dead relatives.

So, here, for me, was a literal ‘open cut.’ I could relate to it very directly. I therefore decided to paint a picture of the fire-bombing of Dresden. I did not have much time in which to do it. An oil painting in four days is not easy. But the painting did reach the stage of an almost completed first draft. In addition, since I was studying ‘Deconstruction’ I tried to embed some theoretical reference in the work. I drew from Heidegger’s term ‘Destruktion’ as well as the beguilingly evocative writing of Nietzsche and his ‘Twilight of the idols.’ Heidegger and Nietzsche are stunningly brilliant but their thought did play a role in helping Hitler forge his Nazi ideology.

Post script: The photograph below shows the painting I did for the ‘Open Cut‘ show. It depicts a tiny portion of the wreckage of Dresden after the incendiary bombs had rained down upon it. The painting remains unfinished. 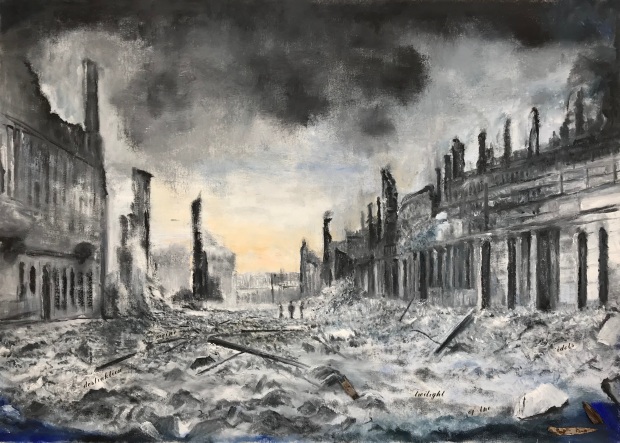 From: Uncategorized
← An MA in Fine Art: There’s something about difference
Black rose heaven →
No comments yet