Site-specific art: a brief engagement with the campus of an art college 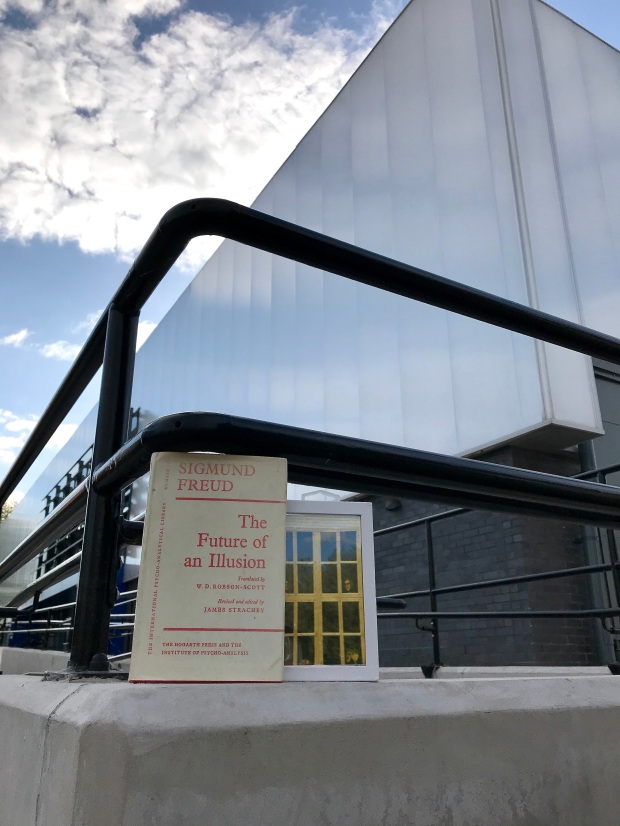 I had been given the opportunity to make and install a ‘series’ of site-specific works of art. Fortunately, ‘works of art’ nowadays is a very inclusive category and whatever I chose to do would more-or-less count as art!

The brief included an excellent reading list amongst which was Clifford Geertz’s (1988) ‘Works and lives: the anthropologist as author’, the wonderfully titled ‘Non-places: introduction to an anthropology of super-modernity’ by Marc Auge (1992) and Merlin Coverley’s (2010) ‘Psycho-geography’.

These texts provided a backdrop of ideas for my project. I identified the campus of UCA as an anthropological site which included an admixture of buildings and structures that reflected both a psycho-geography and something culturally specific. I had also been reading Iris Murdoch’s views of the intentions of art in which, among other things, she had said that ‘art is fun and for fun’.

In consequence, I resolved to enjoy myself ‘playing’ with a few episodes of a personal psycho-geography located in an anthropological context. And I did have some fun.

Throughout the time allocated to the project I made a total of 7 interventions. I used books (one of which was Freud’s ‘The future of an illusion‘), record covers, a photograph of a work of art, a small brass sculpture of the Buddha and a fanciful model of a hunter/woodsman. (The complete set of interventions was later presented in a slide show to the MA students.)

The photograph above shows one of the interventions I made; underneath it all I intended it to be a really serious warning:  Freud’s account of ‘The future of an illusion’ can be read as a text concerned to draw our attention to any ‘ready-made’ belief system manifested in a culture. Correctly, he points out that, unless we are very careful, we can uncritically accept the limiting perspective that the belief system provides. We can extend his idea and ask a question about the meaning of buildings – along with their function: the UCA site enjoys a shiny new place in which, as far as I can tell, the new arts of performance are explored. (The building itself seems to be a kind of performance.) But these new arts may well simply serve as seductive distractions – and continue to beguile people with the hope and fantasy that they will ‘be someone’. The problem is that they are already ‘someone’ – and I think  that they might well feel happier if, rather than seeking the approval and attention of others, they were to place more trust in their own powers and obvious abilities.

In its own modest way I hoped that my site-specific intervention (by making explicit the connection between illusion and the function of the building) alluded to the possibility of this further alienation of the self.