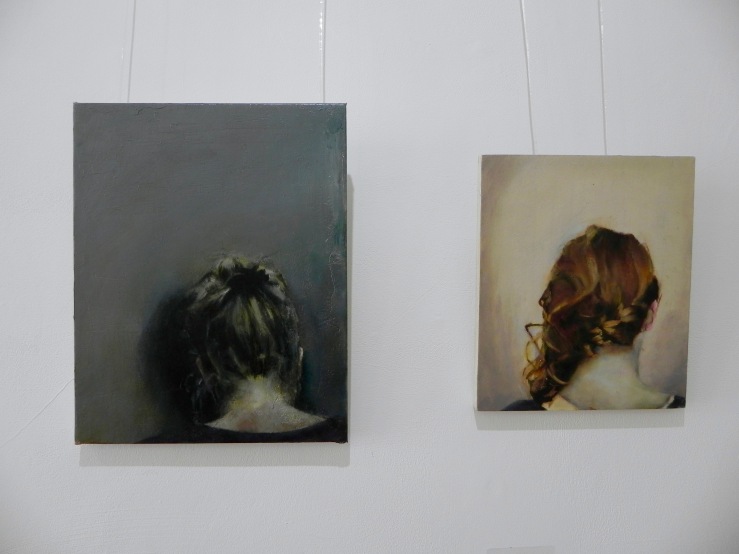 Ian Woodward is, without doubt, a great contemporary artist. His exhibition of paintings on the theme ‘humanity’ was (and is) remarkable: in a series of brilliantly executed works he demonstrates both his outstanding technical skill and his wonderful yet challenging aesthetic judgement. His paintings take, as their main subject, a considered response to the image-world which mediates our perceptions of modern life.

The particular aspect of the image-world upon which he focuses is that which presents and reflects cruelty, destruction, terror, trauma, alienation and brutality. In so doing Ian Woodard places his work within a particular sensibility, a sensibility at the heart of nineteenth and twentieth century art: it is a sensibility dealing not so much with the classical concerns of ‘truth’ and beauty but with the ‘dark’ side of human experience.

Indeed, Ian himself has acknowledged that his work reflects a particular view of the world: it is clearly post-Nietzschean: it is a world where conflict, destruction, pain and suffering abound – where tragedy is both endemic and inevitable. One almost senses, through his art, the fearful Orwellian observation: ‘If you want a vision of the future, imagine a boot stamping on a human face – forever.’ But Ian Woodard’s work is not restricted or contained by this particular sensibility: his paintings point to the wider concerns set out in the philosophy of existentialism. He takes as his emphasis the notion that the concrete facts of existence prefigure the emergence of any specific human being; his works of art leave open the possibility that any individual can remake him or herself.

In the exhibition ‘Humanity’ curated by the lovely Zimmer Stewart gallery in Arundel, Sussex, visitors had the opportunity to experience Ian’s paintings in a relatively intimate space. And whilst the dominant works on display were unsettling and confronting two paintings acted as precious foils to the otherwise distinctly ominous mood. These two small paintings were beautiful in both subject and manner of execution.They featured the hairstyles of two different woman who, in their demeanour, were intrinsically charming and gracious. We did not see their faces; we were left to imagine the subjective dimension of their personhood. In existential terms these two paintings underlined the fact that, for most human subjects, the aesthetic dimension is a central aspect of the world; it is something that sooner or later we strive to realise, enhance and preserve. How good it was to witness a counterpoint to that ‘darkness on the edge of town.’

In addition to consolidating his social perceptions, Ian Woodard expresses a sophisticated refinement of painterly techniques: his canvasses are full of clear, then subtle, then opaque, meanings: occasionally bare canvas sits alongside a multi-layered painted surface; gorgeous intimate passages of colour contrast with unyielding greys and those sober or morose earthy tones. Human faces and forms struggle against a mass of marks, lines and half-suggested shapes. Significantly through his application of paint and his strategies of mark-making he suggests the way existence unfolds, the way existence is emergent; humanity is always coming into being. It is open – and may be either corrupted or ennobled. Nothing is fixed – although sometimes, quite literally, he recognises that we have failed to civilise the beast out of man. The images he creates and presents are stark, demanding, original and consistently powerful.

I should note that the titles Ian gives to his work leave one in no doubt that humanity finds itself in a precarious and deeply uncertain ‘place’. The outcome  (our future) remains uncertain; moreover, it will continue to be uncertain. Gloom, despair and disappointment are among the basic givens of existence: He asks: ‘Does this perpetual desolation suit?’ He reminds us that we may end up ‘Knowing nothing’. He declares:  ‘I waste your time.’ But his portrait of  ‘Simona‘ is there to demonstrate that our experience of beauty certainly makes existence worthwhile.

The Zimmer Stewart gallery must be congratulated for showing the work of such a gifted artist.

The photographs are taken of paintings by Ian Woodard at the exhibition ‘Humanity’ presented by the Zimmer Stewart gallery. (A detail only is shown in one of the photographs below.)

The aesthetic sensibility reflected in Ian’s paintings – that is, a sensibility concerned to explore and express the shadow aspect of humanity (e.g. derangement, despair, suffering, ruin etc.) naturally continues into the 21st century. However, as a sensibility, it contrasts with several others including for example: the classical (e.g. Raphael or Ingres), the conceptual (Duchamp onwards), the ‘Camp’ sensibility (all decoration, nothing-too-serious), Raunch (which, nowadays is here, there and everywhere) and the pastiche, quote-laden, playful, clever, ironic advertisement-art which is standardly referred to as the ‘postmodern’.